The EuroAsia Interconnector will be the first energy bridge between Europe and Asia, linking Greek, Cypriot and Israeli power grids via the world’s longest submarine power cable ever built. The cableâ€™s length of 540 nautical miles (1,000 km), water depth of 2000 metres below sea level and its 2000 megawatts capacity make it the most ambitious electricity connector project in the world.
It will transmit energy in either direction, ending the electricity isolation of Israel, Cyprus and parts of Greece, enhancing the Trans-European network of electricity grids, while contributing to the better utilisation of renewable and low-carbon emission sources of energy.

During the ceremony, Nasos Ktorides, Chairman, Chief Executive Officer and driving force behind the project, declared that â€œthe fact that the EuroAsia InterConnector fulfils the general criteria of the Projects of Common Interest (PCI) plan and has been proposed by the European Commission to be labelled as an electricity highway, proves the significance of the project and the beneficial impact it will have on future generations of European consumers seeking cheaper, efficient and low-carbon emission energy.â€ It is estimated that the expected Social Economic Benefit by the EuroAsia Interconnector will be 10 billion euro. This project, in fact, offers significant economic and geopolitical benefits to the involved countries and contributes to the European Unionâ€™s target for 10% of electricity interconnection between Member States.
The discovery of vast natural gas deposits in the eastern Mediterranean within Cyprus, Israeli and Egyptian maritime zones that are expected to be on stream by the end of the decade, has also contributed to the importance of this Trans-Continental project that will effectively help reduce the carbon emission rates of the producer and consumer national grids linked to this â€œenergy highwayâ€ project.

After the signing ceremony, Gianluca Marini of CESI said that â€œwe are excited to be involved with this â€˜electricity highwayâ€™ that will help the united European energy market cope with an increasingly variable and decentralised electricity supply and flexible electricity demand. The technical survey for the design of the EuroAsia InterConnector, as well as the environmental impact study awarded to CESI will also prove the capability of European-made innovation and self-reliance in a highly competitive global marketâ€. Pietro Basciano of GAS S.r.l. added that â€œthe reconnaissance study to determine the preferred route of the EuroAsia InterConnector involves one of the most challenging sub-sea terrains of the Mediterranean. And so, this in itself is a challenge to us and we thank the project promoters for choosing us for this vital aspect of the interconnectorâ€.

Work on the initial 329-kilometre cable link between Israel and Cyprus is expected to begin in 2017 and be completed in 2019. The second phase will connect the Greek island of Crete to Attica in mainland Greece in 2020 and the third and final phase will connect the cable from Cyprus to Crete with a view of full implementation of the â€œelectricity highwayâ€ by 2022. 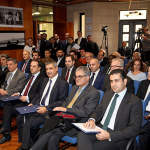 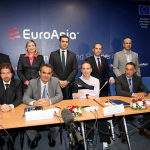