Hospice Seràgnoli Foundation, a great Institution we choose to support

Home/News/Hospice Seràgnoli Foundation, a great Institution we choose to support

Hospice Seràgnoli Foundation, a great Institution we choose to support

LIGHTHOUSE is pleased to announce that it has recently become a member of the Club delle Imprese Amiche della Fondazione Hospice which is born to actively involve private companies in helping the Hospice Seràgnoli Foundation to share its objectives and actively supporting it in spreading its values.

THE FOUNDATION
The Hospice Seràgnoli Foundation was created with the aim of improving the quality of life and alleviating the suffering of patients with incurable diseases, supporting their families and spreading the culture of Palliative Care.

In 2002 the Foundation gave birth to the Hospice Bentivoglio, in 2007 it obtained the management of the Hospice Bellaria and in 2012 of the Hospice Casalecchio. The access to these Hospices is completely free, thanks to accreditation with the National Health System and to the donors who support the project.

Moreover, since 2006 the Foundation has established a fruitful collaboration with the Italian Academy of Sciences of Palliative Care, to deal with training and research.

Doctors, nurses, physiotherapists and psychologists of the Foundation take care of the physical, psychological and spiritual suffering of patients and their families.

“Insieme per Hospice”is the initiative which involve private companies in supporting the Foundation and it represents a wonderful opportunity for companies such as LIGHTHOUSE, who choose to actively contribute spreading a culture that fosters the increasingly in-depth knowledge of Palliative Care and to support their projects which favor patients with incurable diseases.

Associating the name of LIGHTHOUSE to the communication and dissemination initiatives of the Hospice Foundation is certainly an honor, but above all it allows our company to contribute to the diffusion of a mentality in which we deeply believe. 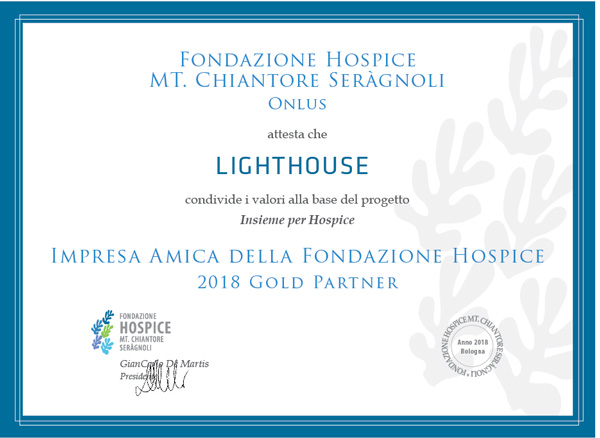